“And if we are able thus to attack an inferior force with a superior one, our opponents will be in dire straits”.   Sun Tzu, The Art of War

We had survived more than a week without electricity and WIFI so we were looking forward to both as we drove from Istanbul to the Gallipoli Peninsula. We arrived at Hotel Kum and Camping after a long hot drive to find the gates open but all buildings locked. We found some men working in the grounds and one approached us with a scowl. ” We are closed. We closed on the 31st October.” I was confused but happy. “Oh good, this is only the 27th!” The reply was even brusquer. “We are closed.”

We found a free and much more hospitable alternative in nearby Eceabat beside the Boomerang Cafe. Ironically, this was a much better position right next to the Canakkale Strait (the Dardanelles) and once again watching huge ships pass by from our pillow was a real treat. 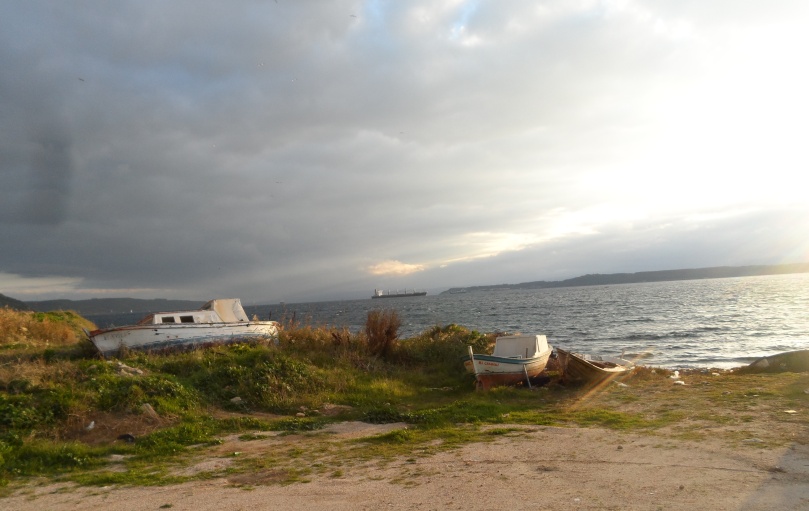 We were officially welcomed to Turkish time by Mesut and his fellow raki loving customers in the cafe as they explained that it is not only the calendar that can be ignored. The Government had postponed putting the clocks back due to the upcoming election. We were delighted to hear this as we thought we were going mad with all our devices disagreeing over what the hour was!

The  narrow strait that is the Dardanelles is the only passage to Istanbul by sea and has seen centuries of conflict. The first naval war took place here in 405 BC when the Spartans defeated the Athenian navy. Alexander the Great, Byzantine and Ottoman leaders have all recognised the strategic importance of controlling this area as they created their empires. During World War I, Britain and France made two unsuccessful attempts to capture and hold the Gallipoli Peninsula and the Straits. There were many casualties on all sides including soldiers from Australia and New Zealand but the Turkish Army managed to resist  against expectations. This campaign became a defining event in the development of Turkey as a Republic. Kemal Mustafa, who went on to become Ataturk the ‘father’ of the secular nation that Turkey is now, emerged as an outstanding commander. Despite the passage of time, ANZAC day is still commemorated every year and many visitors, young and old, still visit from Australia and New Zealand. 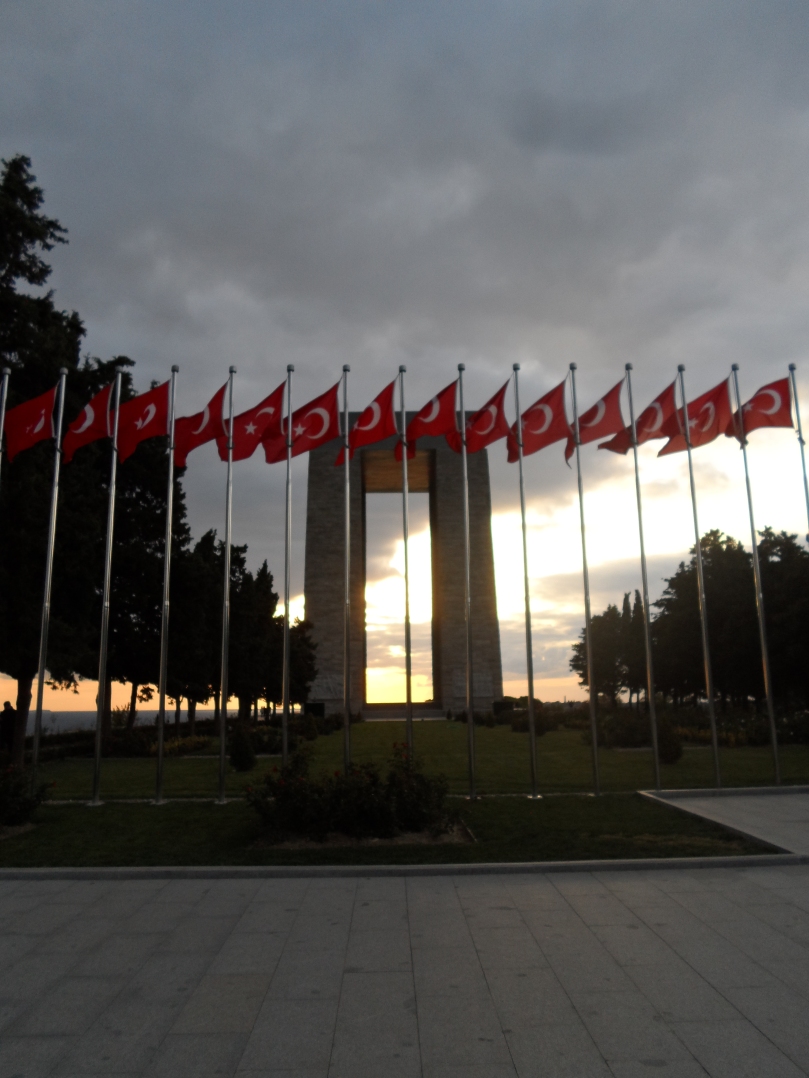 Whilst our motorhome insurance covered us for the Asian side of Turkey we did not have breakdown cover. However we were a whisper away from the archeological site of Troy so we crossed our fingers and took Brian on his first ferry crossing.

We stayed in Tevfikiye beside a pension run by Uran and his parents. The little restaurant at the front also serves as a souvenir shop, breakfast room for the guests, tea house for tourist bus drivers and storage for the scooter!  Uran is a certified guide for the site of Troy 600m away and we are really glad he showed us around. Whilst we had done a lot of advance reading on the archaeological dig and the evidence it had unearthed, we would still have found ourselves wandering around a pile of old stones. The site has revealed nine successive cities spanning thousands of years.

We seriously considered taking a chance on exploring Turkey further without breakdown insurance but decided to head to Greece for the winter. On our last night, as I turned out the light, it suddenly occurred to me that whilst we had been concerned unnecessarily about paperwork to  bring Kipper into Turkey, would we have any difficulties getting him out? I decided there was no point researching it at midnight. Thirty seconds later I was on the internet researching. I discovered that Turkey is classified as high risk for rabies, so an additional test is required for entry into the EU to prove the rabies vaccine is active. Unfortunately the results take three months to process.  Without the test there was a chance of Kipper being taken into three months quarantine at the border.WHY DID I NOT CHECK THIS BEFORE? I decided there was no point waking Graham up to tell him. He would only be up all night worrying.  Thirty seconds later I was shaking Graham awake. We worried together all night, facing our own dire straits!

Uran was a hero. He initially laughed at the rules, then researched and agreed we would need to take Kipper to a vet for the test. He called his vet who said we should be able to get a government veterinary licence instead. Uran drove with us to the local government offices in Cannakale where an official said that no, we would need to go to a vet for the test and wait the three months. Uran asked her to check with Ankara and get back to us. Meanwhile, we convinced ourselves that there are many worse things than spending the winter in Turkey! We discussed where we could go and what we could do. An hour and a half later we received a call from the government official. Yes a veterinary licence would be issued. A further two hours spent between three government offices produced our valuable paperwork.

We approached the Greek border the next day proudly grasping Kipper’s pet passport and the hard earned official, government rubber stamped and sealed licence. The border control officer looked horrified when I offered them to him and quickly waved them away. Customs control didn’t even let the wheels stop rolling so were completely unaware that we may have a dog, cat or elephant in our motorhome, never mind the accompanying import licence. It was one of those very rare occasions when we were both speechless!

Treat of the week: We had great difficulty communicating our requests in Turkey.  Two coffees please….Large or small?…Small please……..I’ll bring you doubles. (Grand Bazaar, Istanbul)

I’d like one melon please (me holding up 1 finger)….Farmer outside his gate replies  in Turkish and holds up 10 fingers….No I’d like 1 melon (1 finger raised)….Farmer pulls out carrier bag and starts filling it with melons….Okay I’ll take 2 melons (2 fingers raised)….Farmer continues talking in Turkish and keeps filling bag with melons…. Okay I’ll take 3 melons (3 fingers raised)….Farmer starts emptying bag and hands me 4 melons….How much..I start to raise my fingers to sign?……………………”ten lira” he answers in English. (Roadside in Anatolia)