Okay… now we see why Spain is so popular with visitors!

Our last view of coastal towers was an eerie mirage on the horizon. Los Alcazares looks out across the sea to la Manga del Mar Menor, a narrow strip of land covered in apartment blocks. We understand that tourism transformed the economy of Spain and realise that millions of people want to enjoy the sun, sea and sand on offer, but this is a big country that offers so much more.

It says something about us that we felt much more comfortable sleeping next to a service station than on all the immaculate camperparks along the coast. But at least we have become more proficient in using apps on our phones. Camper Contact helps us to find somewhere to sleep,  podcasts allow us to keep up with our favourite Radio 4 programmes and Google Maps prevent us getting completely lost when exploring. We checked the latter before walking the two kilometres into Cartagena and a big blue line promised a riverside stroll. However Kipper wasn’t going to get the opportunity for a dip here!

Cartagena is an archaeologist’s dream that seems to be actively peeling back it’s present to expose the past. It was fascinating to walk from traditional Spanish plazas into partly demolished streets.

Access to the Molinete Archaelogical Park is via a bizarrely placed escalator which lifts you into an area blending Mediterranean planting with Roman ruins, a 16th century defensive wall, remnants of the 19th century red light district and a refuge used during the Spanish civil war in the 1930’s!

We walked across town, stopping for a break at a bar which promised afternoon tea with scones. I couldn’t resist, despite being snooty about full English breakfasts and fish and chips on the costas. Graham sensibly stuck to a beer while I crunched my way through biscuits sandwiched with cream and a glass of lukewarm water with a teabag in it. I learned my lesson!

We found a complete contrast in the hills and trees of the Sierra Espuna regional park but the direct Spanish sun has the same effect. Everything seems brighter and louder.  In the city, reflections are blinding and scooter engines and barking dogs reverberate through you. In the countryside, shadows seem alive and birds and crickets sing a piercing chorus. 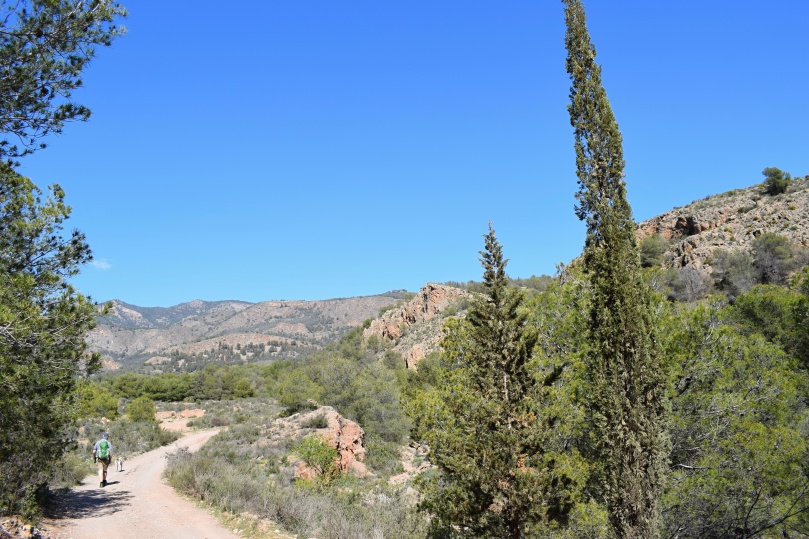 We were on high alert as we enjoyed our first proper hike of the year.  Pine Processionary caterpillars are covered in thousands of irritating hairs which can cause severe reactions in humans and animals. We have heard horror stories of dogs losing tongues and often their lives after coming into contact with them. In spring, the caterpillars create distinctive cotton-like nests which they sleep in and leave to feed. They move about in nose to tail processions which would make them interesting to a curious Kipper.  We kept him on the lead and skirted around the scores of trees which hosted the nests. 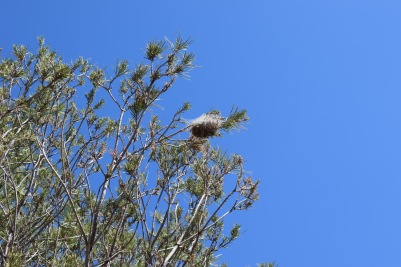 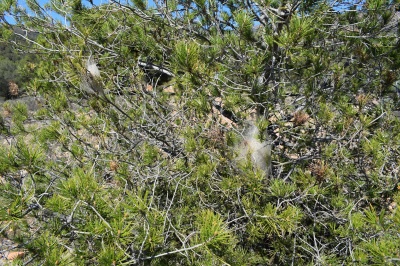 There was a treeless daily walk along the irrigation canal which fed into the lemon groves surrounding us. It was much safer to stick our noses into the delicious produce boxes! 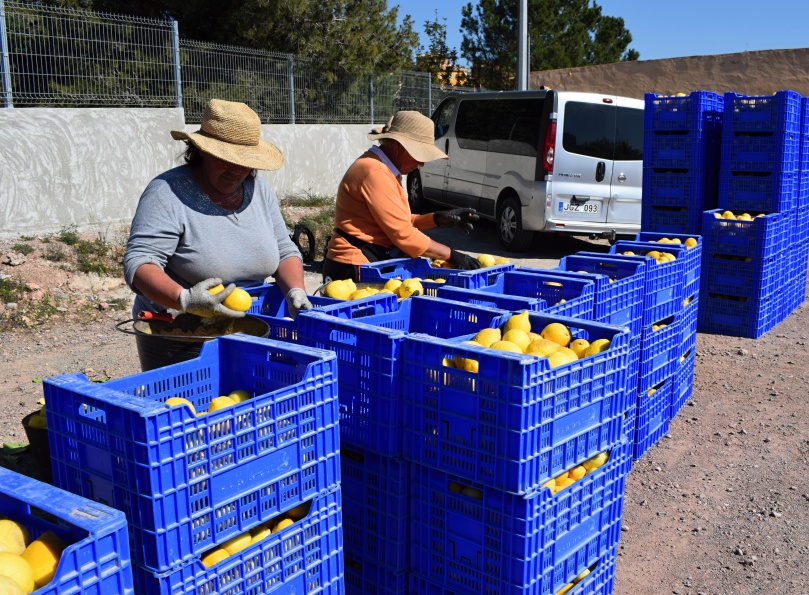 The hilltown of Mojácar was saved from extinction by an enterprising mayor who offered cheap accommodation to artists and craftsmen and is now a significant tourist spot.

Views from the town look one way to the modern seaside resort of Mojácar Playa and inland towards the volcanic plugs in what is known locally as the valley of pyramids. 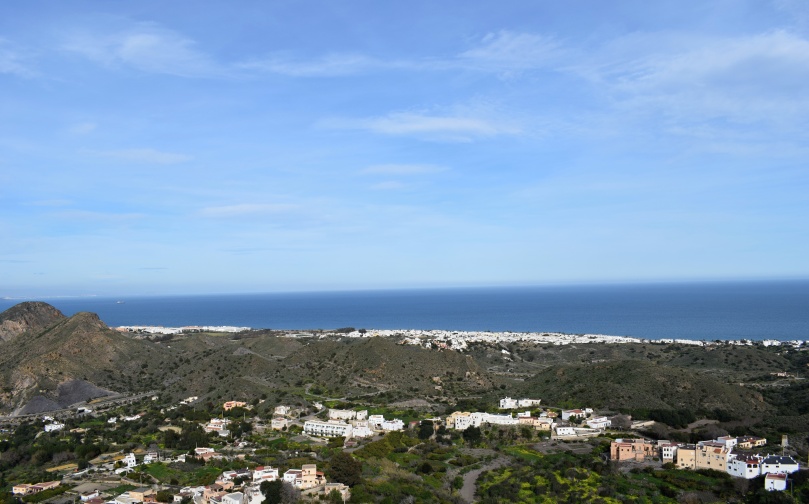 You approach the Cabo de Gata nature reserve through the shimmering sea of polytunnels which provides northern Europe with out of season vegetables. Rolls of waste plastic  and the shanty style accommodation in outlying villages made us think of the tension between bringing prosperity to the Spanish economy and the human and environmental cost of giving us cherry tomatoes at Christmas.

The nature reserve beyond offers a glimpse of coastal Spain before the arrival of mass tourism. We based ourselves in San José and loved walking to deserted beaches through a technicolour world of poppy reds, acid yellows and spring greens. 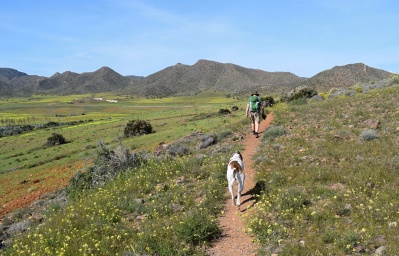 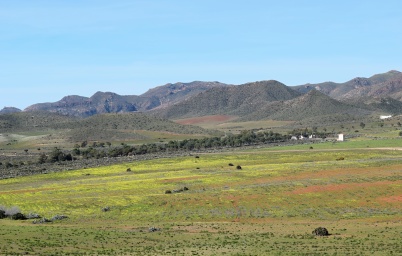 At last Mr Kips was able to run off the frustration of all those No Dogs signs higher up the coast! The volcanic formations on Mónsul beach were a backdrop in scenes on Indiana Jones and the Last Crusade which inspired Graham to get out his favourite sun hat…any excuse!

Building within the reserve is governed by strict planning law and restoration work is carried out here where it may be ignored elsewhere. This satisfies the aims of the park, attracts tourists and means that human impact sits better in the environment. We appreciate that this is not possible everywhere but were very happy to find this beautiful corner of Spain.

The long road ends in a lighthouse, which gives a great view of Arrecife de las Sirenas or Mermaids Reef.

Ironically it has been the quieter parts of our trail that have  surrounded us with sights and sounds that mean we’re getting the message loud and clear. Spain is amazing!!

Treat of the week: Afternoon tea…..what was I thinking?? 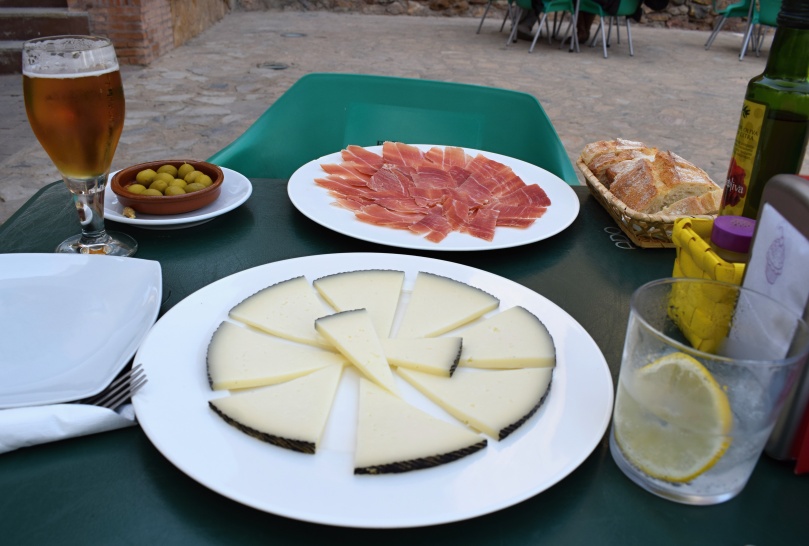 2 thoughts on “Pump up the volume”